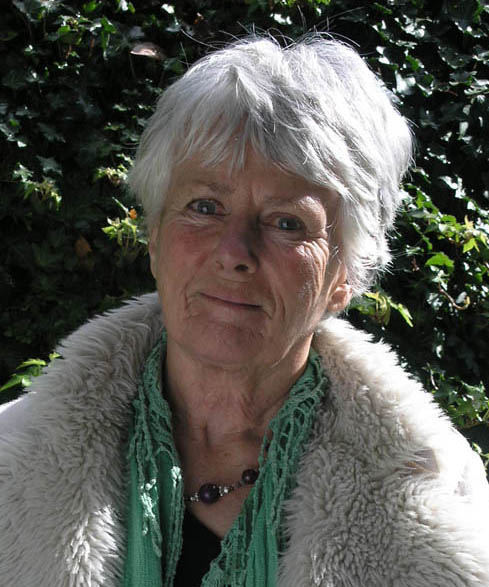 Dorothy Andrews was born in Norfolk, England and emigrated to New Zealand with her young family in 1975. Taranaki has been her home since then.

Art came later in life with a Bachelor of Fine Art gained at WITT, New Plymouth in 2011. Since then she has exhibited in many group shows around New Zealand. Also France and England. She also exhibits in two person shows with Jenny Bielawski.

Her works are in private collections around New Zealand and England.

She presently lives just out of Inglewood with her husband Chris and several pets, where she indulges in her two loves. Creating art and gardening. Two pursuits which often combine or complement each other. Artistic skills have helped create a beautiful environment which in turn provides interesting plants and materials to make art with.

Dorothy is concerned that many of natures wonders that we take for granted will not be there for our grandchildren to enjoy.

Here is Dorothy’s background statement about her work in ‘The Flour Sack Challenge’ part of the ‘Made Over- Preserving & Reinterpreting’.

After researching J.R. Bruce Flour Millers, and the use of flour sacks and other containers of that era, I realised it was not about the flour sack itself but a whole different way of life. A way of life that would seem irksome to young people now but at the time was satisfying and rewarding, albeit very hard and labour intensive.

Many commodities came in cloth sacks, metal drums and glassware and there were many ingenious ways to reuse these containers and turn them into useful household items. This was not a fashion fad. It was a necessity. If you wanted something you made it yourself from the materials available.

These times were not ancient history. The flour sack dress was still being sewn at home until the end of the Second World War. People took a real pride in self sufficiency and ‘Waste not, want not’ was a much used catch phrase.

It has only taken us seventy five years to create a planet of useless garbage. Mainly plastic packaging and other unnecessary items that we could easily do without. We are a lazy generation. It is much easier to throw a plastic drink bottle out of the car window, than it is to take a glass bottle back to the shop to be re-used. It is easier to spend one’s evening on Facebook moaning about how hard life is, than knit one’s child a jersey and it is easier to leave our mess for our children to clean up than do it ourselves.

I produced this little garment as a reference and a tribute to the resourceful and hard working generations that left the world a good clean place for us to inherit (with no plastics in sight).

I have only used materials and methods available at the time.

More details of this delightful work are available on the webshop site: https://fromoutofthebluestudiogallery.com/product/the-good-old-days-dorothy-andrews/