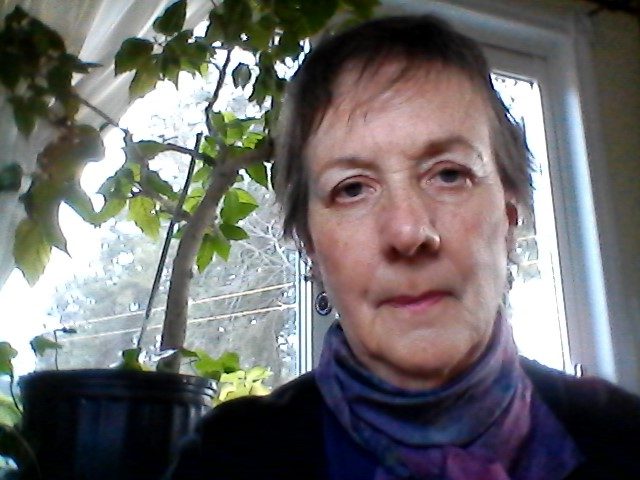 Barbara’s home and studio is in Tottenham, north of Toronto. She graduated from the Ontario College of Art, after attending Sheridan School of Design. She discovered the silk painting technique while at O.C.A. Barbara operated a small textile business creating and selling silk scarves, for more than twenty years. The silk painting provided Barbara the opportunity to explore and manipulate colour and pattern.

Currently, she is investigating cloth manipulation. Her sculptural textile works explore the intersection of the traditional embroidery technique of smocking, and the contemporary craft of painted silk. Barbara has exhibited her new work at shows and exhibitions throughout Ontario.

She was a 2012 Niche Award Finalist in the United States and the winner of the ”10th Anniversary Award of Excellence, at Headwaters Arts Festival Show and Sale, 2012.

Barb is an award winning textile practitioner and teacher based in Ontario Canada. Her work is collected and held in many private and institutional collections. This is a wonderful opportunity to collect a very special piece by an international artist.

Barb talks about her processes and thinking as she created her work for The Flour Sack Challenge.

The Process of Preserving Textiles

This is my first attempt to create a fully three dimensional art form using the textile medium. On hearing of the theme, of the exhibit, I immediately envisioned the canning/preserving process of food to the preservation of time honoured textiles.

I was picturing a piece that would take the shape of a preserving jar, and would also capture the logo of the vintage label.

For the piece to take shape it had to be stiffened in some way, so I tested three different products: gelatin, water based urethane and alginate. I had to take into consideration, the properties of each stiffener: the effect of the medium on the fabric, of the temperature of the surrounding climate and its durability. The gelatin shrunk within three weeks. The alginate was too unpredictable drying too quickly and adhering to the glass.
The water based urethane worked best. It had a slow dry time which allowed some flexibility so it could be removed from the jar, while still maintaining its shape.

The flour sack was coated with a thin layer of urethane using a squeegee. It was arranged inside a qt./litre  preserving jar, in such a way as to display the flour company’s logo. While slightly damp the fabric was removed from the jar through the bottom of the jar.

While still damp, the textile form was stuffed with plastic and bubble wrap to increase/improve it’s shape. The textile sculpture was painted with an additional layer urethane and allowed to dry thoroughly.

To complete and stabilize the piece a base, an upside down pottery dish was glued to the bottom of the sculpture, and to accentuate the appearance of the “preserving jar”, a lid was added to the top.

You can see more images and information about this work on the website shop page: https://fromoutofthebluestudiogallery.com/product/the-process-of-preserving-textiles-barb-hilts/

This work is being sold by silent auction to raise funds for The Women’s Refuge. Please message the gallery on +6421407424 or through the gallery’s social media to place your bids if not able to attend in person. At the close of the exhibition a committee member of the Taranaki Women’s Refuge will open the bids. The successful bidders will then be notified and the works will be available for collection.